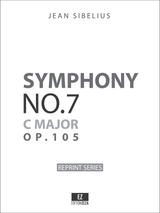 Notable for being a one-movement symphony, in contrast to the standard symphonic formula of four movements. The concept of a continuous, single-movement symphony was one Sibelius only reached after a long process of experimentation.

It has been described as "completely original in form, subtle in its handling of tempi, individual in its treatment of key and wholly organic in growth" and "Sibelius's most remarkable compositional achievement".