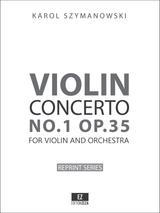 Considered one of the first modern violin concertos, it rejects traditional tonality and romantic aesthetics. The work is dedicated to the violinist Pavel Kochański.

This work is the first modern violin concerto – the first to abandon the tradition of the the nineteenth century and the major-minor system in order to embrace a new sound and colouristic language, and a new expressiveness. Moroever, this Concerto does not draw, even in most general terms, on any other type of violin concerto known previously, and presents an exceptionally original idea, both in terms of its mood aura, the emotion contained in the work, and the form. It is really a concerto-poem – one which does not abandon the concerto and virtuoso features, but which rejects the classical structure and takes on the character of a one-movement (although internally highly differentiated) poem.