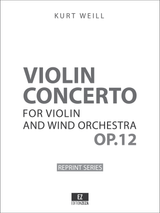 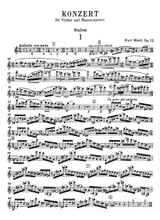 The scoring, for an orchestra of winds with prominent percussion, suggests the brilliant, biting sonorities of Weill’s theater music. It was dedicated to the violinist Joseph Szigeti.

Scored for two flutes, clarinets, bassoons, horns, one oboe and trumpet, percussion, and four contrabasses, the concerto comprises three movements. The solo part is challenging not only from a technical standpoint but also from an acoustic one (it is crucial to make the violin ‘sound’). In spite of these challenges – or precisely because of them – critics in the 1920s called the solo part highly idiomatic and extremely rewarding. Since then the concerto has become a ‘modern classic’ in concert halls around the world.

The solo violin is a constant presence in the first movement, but although its part is highly demanding in the grand concerto tradition, there is a wonderfully integrated, chamber music quality to the whole.The heart of the concerto is the unusual second movement, with its three interlinked sections—a macabre nocturne, with a chilling xylophone solo; a cadenza for the violin, with occasional contributions from the
winds; and a rhythmic serenade. The finale is at once a serious wrap-up and an outright showstopper.