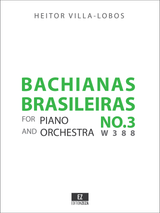 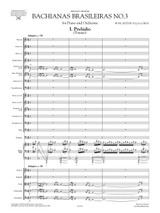 It is the only Bachiana written in the form of an instrumental concerto. It is in fact a fully-fledged piano concerto about 30 minutes in length, and in four movements. As usual the four movements have a formal "Bachian" title in Portuguese, followed by a "Brazilian" title.

Villa-Lobos typically begins his Bachianas with a slower movement so that he can write a song sharing some of the melodic characteristics of a Bach aria. This is the case with the opening movement, "Preludio; Ponteio." This movement is in a basically slow tempo, although the central part of the movement (which is not in the standard sonata form of a concerto first movement) is in a fast tempo that allows for brilliant display by the pianist. A ponteio, by the way, is a type of Brazilian song genre. (The Brazilian titles of the first three movements all refer to particular types of Brazilian music).

The second movement, "Fantasia; Devaneio" is fast, with an even faster middle section, while the third, "Aria; Modinho," is a slow and romantic song with, again, a faster tempo in the central part of the movement.

The final movement is another one of Villa-Lobos' nature portraits. It is called "Toccata; Pica-Pau" and is one of the composer's finest movements. Picapau is the name of a Brazilian woodpecker. Its fast, drumming repeated sound is imitated by the piano requiring rapid alternation of fingers.