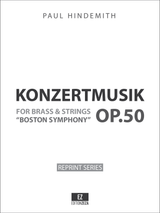 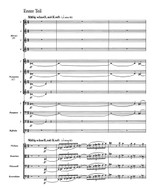 It was one of a large group of pieces commissioned for the 50th anniversary of the Boston Symphony Orchestra by its music director, Serge Koussevitzky. Also known as Bostoner Symphonie.
The work is in two movements. An emphatic unison note from the brass is answered by an upward-rushing phrase from unison strings, which launch into a brisk and rather stern chordal accompaniment for the main theme, a long-breathed, chromatic melody declaimed by unison brass, with occasional pungent harmonic underpinnings. The second theme, bracing and energetic, is stated and developed by brass alone, in virtuosic counterpoint. After a remarkable cadence featuring hieratic horn calls and a "rocket" phrase on the interval of the major third, the strings and brass reunite for further development of the second theme, with low strings repeating the opening melody underneath. After a second cadence in which string chords of stacked fourths tumble to a halt, the strings again sing the opening melody, with doleful harmonies from the brass ending the movement in a slow and melancholy mood.